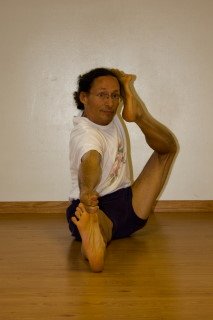 After growing up in both Florida and Montreal, Siegfried began practicing Iyengar yoga in 1992 after meeting Kimberly.

"What attracted me to Iyengar yoga is that it engages my mind as much as my body. It is challenging physically and has also provided me with a way of understanding consciousness," he explains.

He has a Ph.D. in physics and teaches physics at Fairmont State University. In the past, he has also taught a course on Yoga Philosophy through the Department of Philosophy and the Program for Religious Studies at WVU.

He provides clarity, humor and depth during his classes.

"To convey experience within, I need to be clear in explaining what to do and exactly how to do it. Humor provides a balance for the clarity. Both must be present in practice and in yoga, and I want to communicate instructions in an affirming, lighthearted atmosphere. Students find depth as they uncover what is beneath the normal awareness, and it is required during a student's practice of discovery."

Three Phases in the Development of Consciousness (poster presented at the Science and Nonduality Conference Oct 23, 2015, San Jose, CA.

Transformative Nature of Yoga (published in Yoga Rahasya, the quarterly publication of the Ramamani Iyengar Memorial Yoga Institute in Pune, India; vol. 12, no. 3, 2005)

The Art and Science of Yoga(published in Yoga Samachar, Fall 2009/Winter 2010)